Nuka-Cola, the most popular drink of the post-apocalyptic world – at least according to the famous videogame Fallout 3. The widely known dazzling blue bottle color was adopted as standard in 2052, after market research programs indicated that the blue color was the favorite in 86 people out of a hundred polled. The Quantum Cola includes a mild radioactive strontium isotope and glows in the dark. Quantums posess a high value, because they are rarely found these days in the wastelands and are often protected by wild ghouls or giant ants. But I didn’t really needed to explain this, did I? When a friend of mine, who is also a videogame-nerd, had his birthday, I decided to craft a Nuka-Cola Quantum lamp for him. It wasn’t until then that I realized you hardly find classic Coca-Cola bottles these days. Once I found a classic 0.33cl bottle in a shop that seemed to withstand modernity and got my hands on some crown caps I was ready to go. For the bottle I used mouthwash with matching colour and glued the crown cap on the bottle with a hot glue gun to prevent the liquid from evaporating. The caps where all handpainted because printed stickers didn’t look lifelike in a first test. Next I printed a label on sticker-paper. The original texture in the game actually looks far less detailed than the label I found on deviant art which also kept me from creating a label myself. The only thing I changed was to make the shape a bit rounder because straight shapes develop folds on round objects. For the lamp I used a wooden box and glued some fan art with nuka-cola ads on the top and front of the box. Afterwards I sew a round circle inside the box to make space for the bottle. To give the box a used look I painted it with weather-proof paint. For the glow-effect I used an Osram DOT-it and placed it right under the hole. The light is turned on and off by pressing down the bottle, which is very neat because you don’t see any cables or buttons.
The last step was to put some felt-feet under the box und between the lamp and the bottle to prevent the weight of the bottle from turning on the lamp. 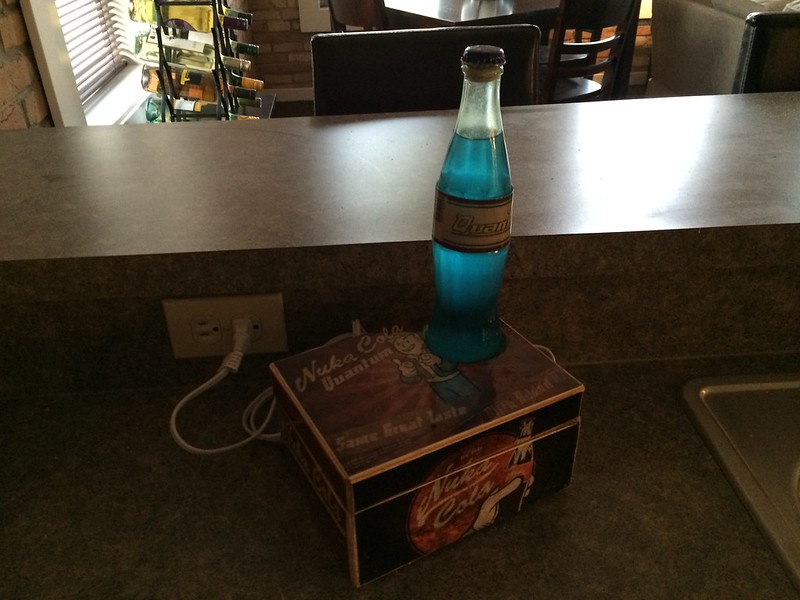 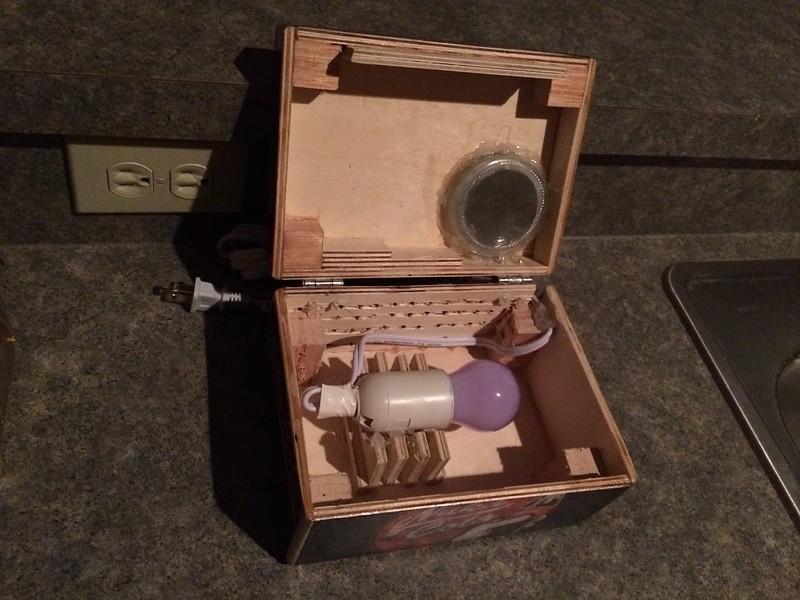 I’m happy to see that some readers picked up this article and created own versions of the lamp. Above is a lamp from Cari who added a few own details like flour in the bottle to help with a glowing effect with a downside of shaking the bottle from time to time to prevent sedimentation. Her lamp setup also features an actual bulb and a chord.